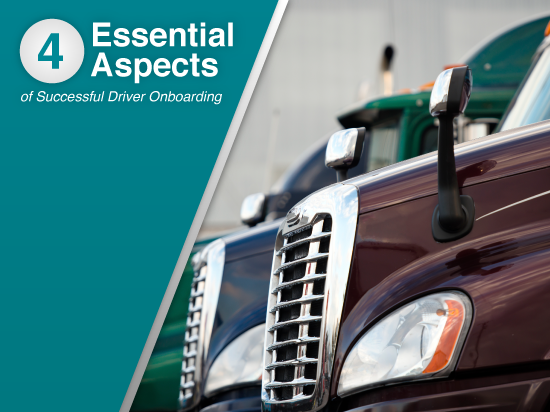 Finding new drivers is one thing, but keeping them is entirely a different story. In fact, recent data shows that half of all hourly workers leave new jobs within the first four months, and 50 percent of senior outside hires fail within 18 months.

According to the ATA, the turnover rate at large truckload carriers reached more than 90 percent for the 10th consecutive quarter at the end of 2014, while the rate at small truckload fleets hit 94 percent, so it’s clearly a problem that needs a solution.

Megan Younkin, one of our Strategic Programs, Inc. consultants, explains that an important way to combat the challenge is by implementing a robust employee onboarding program.

“Data has shown that 90 percent of drivers decide whether they will stay at an organization within the first 6 months on the job,” she says. “For this reason, a successful onboarding program can be crucial.”

A proper onboarding program can shorten a driver’s learning curve, increase productivity and reduce errors. It can also better facilitate compliance with company policies, legal procedures, and rules; improve job satisfaction and retention; and promote communication between managers and drivers.

“The initial first impression a driver gets when they come in for onboarding is important because they are still trying to decide if they made the right decision,” Younkin says. “And with so many trucking companies being incredibly ruthless with their recruiting practices, a driver probably has multiple options to go other places, and competition is so high, so that first impression is crucial now.”

Gone are the days when you can just hand a driver a manual and hope it makes sense. A savvy onboarding program will establish a connection between the driver and his new work environment, and make sure everyone is on the same page when it comes to the job.

A trucking company who calls on Strategic Programs’ services, will benefit from our best-in-class surveys, which assess new drivers’ expectations of the organization, their work, their fleet manager, the work environment, and compensation and benefits. Plus, the results will alert the organization to any concerns or needs of the drivers in order to make sure it’s a win-win for both parties.

“It’s all about making sure the expectations are set well so when someone gets on the road they are not saying, ‘this is not at all what I thought it would be,’” Younkin says.

Communication is a vital part of the onboarding process. It should be a back and forth conversation and not just a reading off of a checklist. “We usually recommend that a supervisor conduct an expectation exchange with each new driver and that is a template that’s provided to supervisors so they cover all the bases,” Younkin says. “They should let drivers know how to get a hold of them, when they are available and who to get in touch with if they are not available.”

The conversation should also include any issues that may have popped up in the past with drivers. For example, if a driver will have to go to New York City on occasion, that should be discussed.

“One of the things that is helpful is not just trying to assimilate the driver into the organization, but also including their families into the culture,” Younkin says. “Maybe a letter home to the family welcoming them to the team or some communication of what to expect.”

Once a driver starts at his or her new job, a key part of retaining them is checking in from time to time to make sure they are happy. This is especially important during the first few days and weeks, when the excitement of starting something new might begin to wear off. This is where a company can ensure no misunderstandings lead to someone walking away.

Younkin says that some of the most successful fleets the company has worked with have a set policy for different people in the organization checking in with new drivers in the first several weeks, rather than just the manager doing so. For example, one week someone from payroll will check in with them, a few days later someone from the safety department, and so on.

Onboarding isn’t just a way to get a new driver into the system and ready to work; it’s a savvy, friendly and welcoming way to make a new hire feel like part of the team and want to be part of your strong organization. It’s a way to ensure that there’s no confusion about the job requirements and that everything runs smooth from Day One.

Keith Loria, Staff Writer
Keith Loria is a staff writer with Strategic Programs, Inc. and TruckDriverRetention.com, helping us cover the workforce & HR challenges that companies throughout the trucking industry are facing.