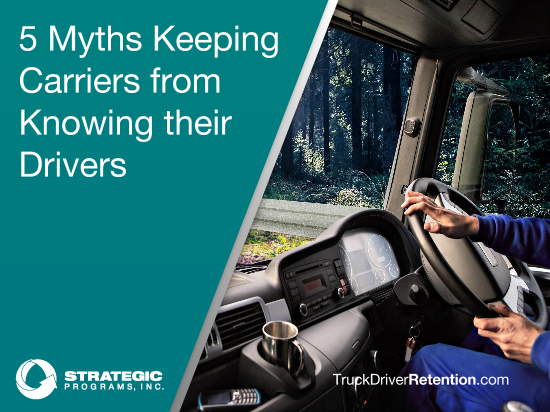 “We don’t need to do a survey since we already talk to our drivers.”

“We have more important things to deal with first.”

“We’re going to conduct the survey ourselves.”

How many times have these statements come up in a meeting when deciding whether or not to survey your drivers? More often than not, these are coming from leaders who have been misled by myths about driver surveys they believe to be true. Unfortunately, these myths often prevent carriers from taking action when it comes to finding out what matters most to their professional drivers.

To dispel these myths and inspire your organization to take action, let’s take a look at some of the most common myths and reveal the truth so you can make better decisions.

Myth 1: Surveys won’t tell you anything beyond what you already know.

Thankfully, many trucking companies are in the practice of talking to their drivers and employees every day—and that’s a very good thing! However, based on these ad-hoc conversations, companies have a misperception that they’ve got all the information they need to know. But that’s not the case. If you’re relying on ad-hoc conversations, you’re simply not getting the full picture.

“In many cases, you’re hearing from the minority—the outspoken drivers who might only make up 20% of your population,” says Jay Green, VP of Business Development at Strategic Programs, Inc.

What about feedback from the other 80% of the organization? A survey helps elicit reliable feedback beyond what you already know and from a large enough group that’s representative of your entire workforce. Many frontline problems develop as a result of process breakdowns and communication issues that start in the shop or dispatch, and then cascade down to drivers. It’s important to understand the root cause of an issue by gathering feedback from the entire organization.

Myth 2: We can conduct a survey on our own.

If you don’t have expertise in how to administer surveys, it requires a significant amount of time and effort to put a strategy, system, and process in place. When organizations choose to conduct surveys in-house, they typically struggle with establishing the right cadence, asking the right questions, eliminating bias and accurately analyzing the data to provide actionable results. Unfortunately, internal surveys also make it difficult to get the level of participation required because participants have concerns about confidentiality.

An outside third party provides actionable, quick, real-time data that allows you to focus on your business and address the areas where you can have the most impact. With templates and a system in place, as well as an in-depth understanding of the trucking industry, Strategic Programs efficiently administers surveys in a way that produces relevant data for carriers about what’s working, as well as how they can improve. Their impartial status has led to clients reaching participation rates above 90% on surveys that were only open for a few weeks.

Myth 3: Surveys distract you from dealing with existing problems.

This myth begs the question: If you already know the problems, why do they still persist? And, why haven’t you addressed them? The answer lies in the fact that you may not have uncovered the real problem.

“In the years I’ve been working with trucking companies to administer their driver surveys, there’s always at least one thing that comes up that the company didn’t know about,” says Green.

Surveys pinpoint simple fixes, such as which truck stops drivers prefer; or the fact that drivers don’t know who to call when their truck breaks down. Survey data also serves to highlight bigger issues—such as maintenance problems or bottlenecks in the system—that impact not only drivers but the entire organization. Until you’ve done due diligence to conduct a survey and gather honest feedback, you can’t assume you know all of the problems in your organization.

Today’s carriers are facing talent shortages that make recruiting and retaining drivers tough, especially when the cost of replacing a driver is about $5,000. That’s where a survey can help. Surveys not only identify areas of improvement that may help you retain drivers, but they expose changes you can make to encourage a driver to return.

Exit surveys conducted by a third party can explore questions such as whether or not a driver would be willing to come back, and what might entice them to do so. For example, a driver might indicate that they would be willing to return if they had a different route or account. Rather than spending $5,000 to replace a driver, you can make a phone call and offer a new route to the driver who left, all thanks to information gathered from the exit survey. And, if you’re not able to entice drivers to return, surveys provide data about why people like to work for the organization; those are the incentives you can use to recruit new talent.

Myth 5: A survey won’t help us improve our operational efficiency.

Surveys are a critical part of the equation when it comes to addressing operational inefficiencies. If you don’t know what operational issues exist, it’s difficult—if not impossible—to address them. But when you understand the problem, you’re able to make improvements with just a little effort.

“A client recently told me that he was impressed by the quick wins,” says Green. “Thanks to the survey we conducted, he got a lot of easy fixes that didn’t cost a lot in terms of time or money, but they delivered results.“

Operational effectiveness relies, in part, on happy drivers. Surveys provide a way to gauge how your organization performs when it comes to driver incentives. In surveys conducted by Strategic Programs, drivers consistently mention time between loads as an issue that impacts not only their earning potential but also negatively impacts the operation. Having this data in hand helps carriers work with shippers and receivers to find and leverage efficiencies that will help drivers get the most mileage possible and reduce their wait time.

Research shows that something as simple as a “thank you” can improve organizational performance. Survey data will let you know if drivers feel appreciated and how recognition for a job well done might be what your organization needs to improve engagement levels that can lead to improved operational effectiveness.

I challenge you to reconsider the validity of these myths in the context of your own organization. How might a survey help you gather input from your drivers that you wouldn’t otherwise be able to access? Would data from a survey enable you to understand what engages drivers and what holds your organization back? If you answered yes to these questions, it’s time to let go of the myths and reach out to a provider that can help you conduct a survey that delivers results for your organization.